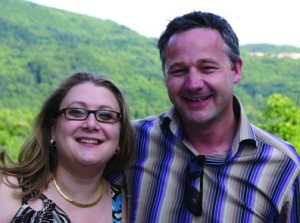 For Better, For Worse; Commitment Matters

The theme of the “forever conversation” for National Marriage Week 2020 is an inspired choice of words. So often, so many people ask; “is anything forever?” “Can anything last?” Well, it depends. In one sense and in so many ways nothing lasts forever, in a material sense that is. After all, we know, we are born, we live and we die. That’s it. Earthly life here and now comes to an end. Everything perishes sooner or later. We are all of us probably more aware of our mortality now than ever before at this ongoing time of anxiety and fallout from the Coronavirus and that’s no bad thing. Why? Because we do need to think long and hard about permanence and stability in an era of social and moral fragility. In his thought-provoking book, Morality: Restoring the Common Good in Divided Times, Lord Jonathan Sacks, the former Chief Rabbi states some obvious but at the same time extraordinary truths;

“The family, man, woman, and child, is not one lifestyle choice among many,” he writes, but “the best means we have yet discovered for nurturing future generations and enabling children to grow in a matrix of stability and love. It is where we learn the delicate choreography of relationship and how to handle the inevitable conflicts within any human group. It is where we first take the risk of giving and receiving love. It is where one generation passes on its values to the next, ensuring the continuity of a civilisation. For any society, the family is the crucible of its future, and for the sake of our children’s future, we must be its defenders.”

Of course there is nothing new about this line of argument for the social benefits of the lifelong stability of marital commitment. In their book “Families without Fatherhood” published by the Institute of Economic Affairs in 1992, academics Norman Dennis and George Erdos detailed the results of large, long-term studies of children through to adulthood. They showed that the children of marriage are far better off by every measure of their own well-being and their relationship with society in childhood, youth, and adulthood. Surprisingly they even quoted ‘The Ecclesiastical History of England’ by the Venerable Bede who describes how the missionary monk, St Augustine of Canterbury felt that his work in the late 6th century was futile in the face of widespread, lawlessness, sexual promiscuity and the neglect of children. Pope Gregory wrote to Augustine instructing him to teach about marriage and its many benefits. St. Augustine and his monks did precisely this and according to Bede, England recovered. History repeats itself it is said and perhaps this is an indicator that this is true.

Marriage is a rich generator of social and human capital. Whether an individual ever marries or not, a healthy culture of mature and serious commitment benefits every person in our nation: rich or poor, religious or not, educated or otherwise, parent or childless, from any ethnic heritage. Marriage as an institution, is not a conservative or liberal idea, not a plaything of passing political ideologies. New research from pioneering marriage educators and therapists are laying out exciting new paths to stable relationships and marital success. Innovative leaders are beginning to focus on the vital new question: What can we do to strengthen long-term stability in relationships? In other words, how can we encourage everyone to think about permanence and the “forever” component in their shared life together as couples.

The history of progress in the Western world is the history of confronting entrenched social problems once considered intractable, such as slavery, racism, poverty, drunk driving, domestic violence, sexism, excessive tobacco and alcohol use, and now environmental degradation. In each case, the correct response is not fatalistic acceptance, but action. Few social problems are ever perfectly resolved. However, the decline of marriage as a social institution is not inevitable. Recovery is possible. Our goal is not perfection, but progress. It’s time to “big-up” the benefits of marriage, recognising that whilst it may not be possible to persuade cohabiting couples to commit to marriage or make every hurting marriage recover and survive; it is possible to help more relationships become more stable and for marriages to succeed. Each and every faithful public commitment is like an amplifier of all that we know to be instinctively noble, enriching and true for human flourishing. And we have to find ways of capturing the popular imagination of the reality of the astonishing power of spousal unity and love. I believe that one of the ways to capture the imagination on the importance of commitment in relationships for future generations is to speak of the same urgency of preserving the stability of the home founded upon marriage in the same way that we address the urgency of the environment. This is summed by the pithy phrase “human ecology.” In fact, it’s not such a new idea or concept to think of the “environment” of the marital home as something to be protected. As long ago as May 1991, the then pope, now, Saint John Paul II declared the following in the encyclical letter Centisimus annus commemorating 100 years of Catholic social teaching;

“In addition to the irrational destruction of the natural environment, we must also mention the more serious destruction of the human environment, something which is by no means receiving the attention it deserves. Although people are rightly worried — though much less than they should be — about preserving the natural habitats of the various animal species threatened with extinction, because they realise that each of these species makes its particular contribution to the balance of nature in general, too little effort is made to safeguard the moral conditions for an authentic “human ecology”.

It is tempting to imagine that this idea may have even seeped in to the thinking of government not long afterwards. As Lord Sacks relates in his book already quoted; “In the mid-1990s, the Secretary of State for the Environment invited the Archbishop of Canterbury, George Carey, the leader of the Catholics in England, Cardinal Hume and myself as Chief Rabbi to come and meet him. He told us that because of the breakdown of marriage more people were living alone. The result was pressure on the supply of housing. Four hundred thousand new units needed to be built, he said, in south east England alone. Could we not do something about it? Could we not make marriage attractive again?”

We are living through an era of intense anxiety and imposed isolation, a moment in our history that has witnessed increasing strain of epochal proportions on the bonds of life and love that tie us together as families, households and communities. And yet we know the “environment” of mutual support, love, nourishment and care espoused in committed faithful love has survived. And perhaps it will go on to thrive ‘forever’ because we have been compelled by forces beyond our control to re-assess what it means to “cherish” – the art and grace to keep someone deeply in mind. The marriage vow stand as a permanent testimony to this.