Home » Finding a way back 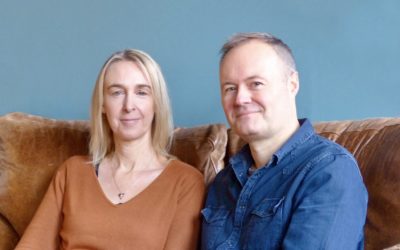 Finding a way back

Claire I had reached the end of myself and, what I thought, was the end of our marriage. Steve and I had met in our church youth group, fallen in love towards the end of our teens and got married at the end of my second year of university. Just before then, Steve had landed his ‘dream job’ in a recording studio. The reality, for us, however, was that for the first decade of our marriage he worked around the clock, often seven days a week. When he was at home he was totally exhausted and so I felt I had his dregs rather than the husband that I had longed for (and expected). This all took its toll and, once or twice a year, I would have a meltdown and say that I couldn’t go on. As neither of us really knew what to do about it, I would eventually stop shouting and we would simply put our heads down once more and get on with life as it was.

I got more and more heartbroken, however, feeling like it wasn’t the life I had signed up for, but couldn’t see a way out of. That was, until a friend started to open up to me about how he understood how I was feeling, because that was how he was feeling in his own marriage too. I was so relieved to be able to connect with someone who really ‘got’ me, that I didn’t realise quite how emotionally invested I became with him. Then one day he told me he was leaving his wife, and asked me to go with him. I panicked…then chose to leave to be with him.

A few weeks in he came to me and said that he felt he had been giving me care and consideration in way that he’d never given his wife, and that he needed to go back to her to learn how to do that for her.

Suddenly, I was left alone, devastated and distraught. I thought I had lost everything: my husband, my home, my church and even my career (as I’d been asked to write a series of books by a Christian publisher – I didn’t feel able to do that anymore). Significantly, it was Steve that I contacted first, to let him know what had happened. He dropped everything and helped me move to my parents, which is where I stayed for a good few months, healing and deciding what the next step was.

Was I really that complacent?

Steve I knew there were deficiencies in our marriage, and Claire has already described how her frustrations would come out, unfiltered, periodically. But I had simply assumed that things would calm down eventually and life would go back to normal. I was reluctant to recognise the gravity of our situation – simply because I didn’t know what to do, but I also didn’t want to admit that we had a problem.

Wake-up calls come in different shapes and sizes – I guess you could class this as a big one! As I sat stunned with the news Claire was leaving, an unwelcome thought lodged in my head: how complacent must I have been not to have seen this coming? Over the next few days, as I tried to come to terms with how on earth we had got to this point, I felt a sense of complete helplessness and yet, deep down, I had a desire to fight. To fight against despair. To fight against hopelessness. To fight for our marriage.

Claire We spent some agonising weeks in which both of us wrestled with the pain we were feeling, and wondered how we would find a way forward. Eventually, we decided to spend time with a couple who provided a safe space as well as counselling. After an intense week there, we recommitted ourselves to one another and I moved back home.

We still needed to work hard at our marriage, so found counsellors who lived closer to us, who we didn’t know. During that time they asked a lot of searching questions, and I realised that I had entered our marriage full of romantic notions of what married life should be like, and been totally disillusioned when the reality had been different to my expectations.

With everything stripped away, and us both feeling pretty vulnerable and exposed, we realised that we’d never had the chance or made the effort to build in strong foundations in the first place. When we’d had an offer for pre-marriage classes I’d turned them down, as I would have had to attend by myself (Steve’s work pattern simply wouldn’t have facilitated him attending). And, once married, we were already in the routine of Steve working around the clock, so there was no time to actually think about and systematically work on our marriage. So much of our behaviour and interactions were reactive – and too often done ungraciously, as we were so exhausted all of the time.

At counselling we were taught to intentionally sit down and consider what our vision was for our marriage, and then to regularly revisit it – firstly to see how well we thought we were doing, and then to see whether we needed to tweak anything. In one of the ‘homeworks’ we were set, we were asked to come up with a set of values for our marriage and then to write a vision statement. Just to give you a little flavour of what I mean, here are a couple of our values: 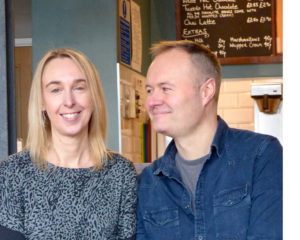 Openness: Be open and honest with one another and talk things through whenever necessary.

Friendship: Learn not to take ourselves too seriously all the time and to have fun together – simply enjoying each other’s company.

We have found that the values and vision statement have become useful markers, measuring sticks even, for us to check against every so often.

Interestingly, through our most painful experiences, we have seen a new aspect to our purpose together being birthed – encouraging true authenticity and giving a safe space to other couples to be honest about their relationships. I began this journey when I wrote Taking Off the Mask, and we have recently written a book together, entitled Grace-filled Marriage.

Claire Musters is a writer, speaker and author of several books. Together, Steve and Claire lead their local church and are passionate about facilitating open and honest conversations. Grace-Filled Marriage will be available to buy from www.clairemusters.com from 7 May. It is also going to be part of the Big Church Read initiative, which encourages churches to read and discuss books together (see thebigchurchread.co.uk)