Lifetime Divorce Risk: Back to the 1960’s 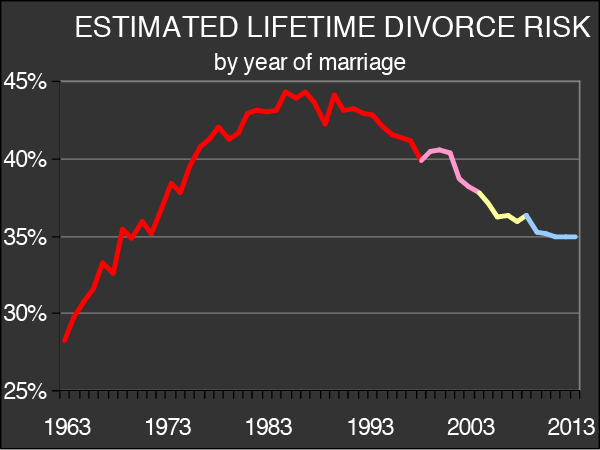 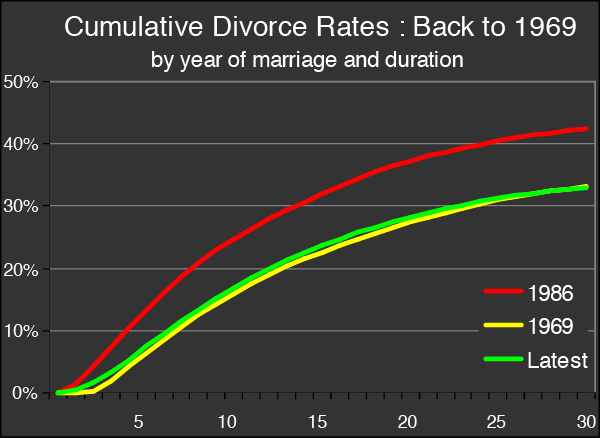 New data commissioned from the Office for National Statistics (ONS 2018a,b; 2019) allows us to estimate the lifetime divorce risk for couples marrying in any given year, as far back as 1963.

Estimates for cohorts marrying prior to 2000 (red line in chart above) are most reliable since they have already experienced at least 75 per cent of their likely lifetime divorce.

Estimates for those marrying after 2011 (blue) are least reliable because less than 25 per cent of likely divorces have occurred. Predictions are then based on the latest data for other cohorts.

We estimate that the cumulative lifetime divorce risk for today’s newlyweds will be 35 per cent. The trajectory of divorce for these couples is only lower among couples who married prior to 1969.

Divorce rates peaked between 1982 and 1996 where more than 42 per cent of marriages in any of these years have ended, or will end, in divorce.

The worst year in which to marry was 1986, where the cumulative risk is 44 per cent. This estimate is likely to prove extremely accurate as 96 per cent of the 1986 couples who were going to divorce will have already done so.