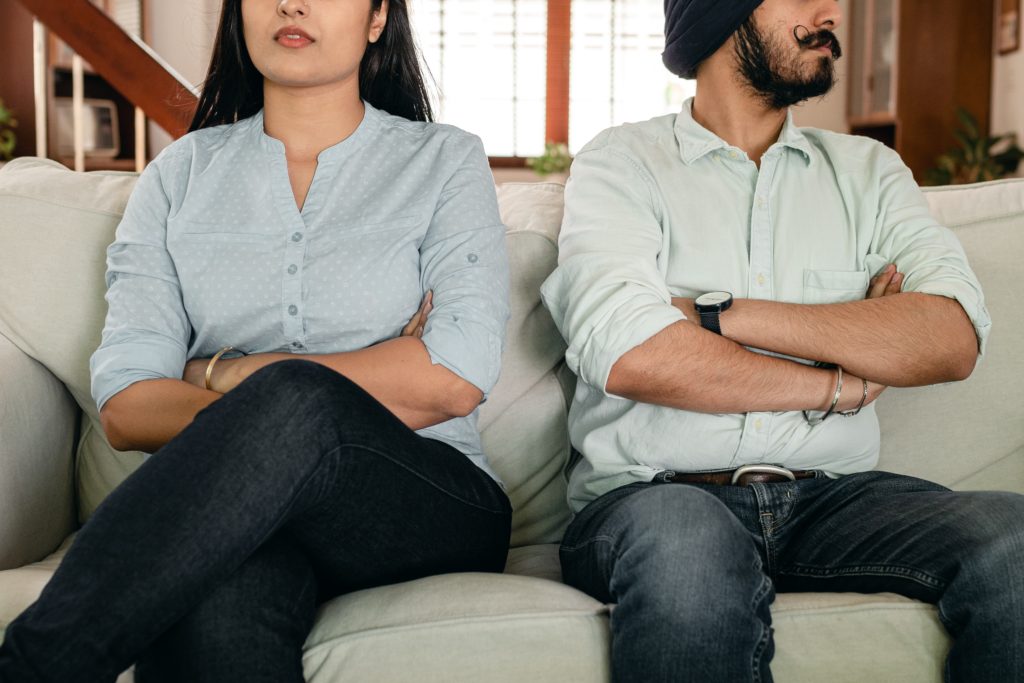 Some of the things you may have spotted over the last year as governments have grappled with the issues brought on by the pandemic are the behaviours that come out when people are under pressure. I’ve noticed these reactions:

– You are pointing out our issues, but what about yours?

And while focussing on any of these, the most important topics within the couple relationship are sometimes sidelined, denied and avoided – they’re in the ‘too difficult box’.

One of the tools we use with couples is called STOP signs. It helps to identify unhealthy behaviours that couples indulge in which risks cutting across and distracting from dealing with the issues.

– Scoring points – E.g. ‘You’re criticising me for not clearing the table, but what about the mess in the bathroom?’ – (Underlying message: ‘I’d rather focus on your issues than mine’).

– Thinking the worst – E.g. ‘You’ve bought me a present – thanks’ – (Underlying message: ‘What have you done that you’re not telling me?’).

It’s easy to spot these things in your partner, but the trick here is to identify what you do and own up to it, rather than skewer your partner on one or more of the behaviours. Have a try – be uncovered!

So those are some of the behaviours to identify and then STOP, but what about setting some positives in place that will help you deal with differences? Why not try being BRAVE:

Behave – I’m going to listen to you and not chuck my toys out of the pram when we argue or feel differently about a topic.

Respect – You are worth honour and respect, because you are you.

Acknowledge – I’m going to let you know that what you say and feel is important to me.

Value – I need to hear your thoughts, even if I might disagree with you.

Express – I’m going to be open not just in saying what I think, but how I feel, why I’m worried, and what I’d like to happen.

You need to be BRAVE to do this because it means you need to listen, which is hard, make yourself vulnerable, be open to being wrong, and to hear and play back what your partner is saying to validate them.

It may be difficult, but if you STOP and be BRAVE you’ll be setting the scene for a much better relationship and be laying the foundation for taking the sting out of those niggly and bigger areas of Conflict.

The Prepare-Enrich programme helps couples prepare for marriage, enrich their relationship, or review and improve their co-parenting by taking stock of their strengths and growth areas. Facilitators, once trained, can help couples develop skills which are key to any relationship and communicate better on important topics. Anyone who wishes to help couples to improve their relationship can benefit from using these thoroughly researched and demonstrably effective inventories.

1. When we’re under pressure we can resort to blame, denial, and distraction – these don’t solve anything.

2. Look out for what you are doing that reduces your chance of dealing with issues – STOP!

3. The problem is the issue, not your partner!

4. Respect and value each other – Be BRAVE!

5. Be open and vulnerable rather than defensive.

Allow yourself to be uncovered!